Community of Grace is sponsoring a second refugee family from Burma.

These families have fled Burma to escape the brutal Myanmar (Burma) military offensive that has swept through their country. Troops have burned villages and food stores, and they have savagely tortured and killed villagers. Those who escaped, like the Lam and Ah Gate families (along with half a million Burmese people), have been displaced for all these years, and many have been living in refugee camps in Thailand for over a decade.

Arriving from the Refugee Camp in Thailand

Hello!
Another successful visit with the family!
Maung Say is attending church on Sundays now. It is in the Karen language and he is very happy to be able to go. We practiced saying "church" in English as the end of the word is so important for us to hear in English and in many other languages the ending is softened. Of course, good ol' English, the "ch" in "Christ" does not have the same sound so we went over that too as he asked. He wasn't able to tell me where the church is as he is still learning the roads.
I brought them a barrel of monkeys game which proved to be very popular and May Paw was particularly good at it. Some neighbor children came over and also enjoyed it. Their case manager, Win, has introduced them to other Karen families in the complex and I could tell they were enjoying the company.
I will be slightly altering the time of my visits going forward to allow them enough time to get back from church in case they all attend. I have learned how to say "Sunday" in Karen. The last family said "Sunday" differently but I think I have this one down already. It sounds like "oh bween nee". It means "break day". All the other days mean 1st day, 2nd day, 4th day, etc. It makes sense now that this has been explained to me.
Posted by Michelle Halonen at 6:08 PM No comments:

The Maung Say Family Has Arrived 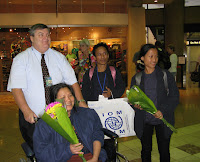 Here are some pictures of the Maung Say family. The first two are from the arrivals. In the first picture are the mother Say La Paw, the father Maung Say, and the 17-year old daughter May Paw. The 14-year old is not pictured. There is also a wheel chair attendant on the left. Several people have asked me who he was so I tell you so you know he just works at the airport.

After the first family assigned to us didn't get to the make the trip at all, and the second family had a mechanical problem with the plane that delayed them leaving Thailand we were starting to wonder if we would get to meet a new family. But on Friday, 5/20/11, the new family completed their trip from Thailand to Japan to LA and then arrived in Phoenix a few minutes early! Yea! Alycia, Cheryl, Kate and I were there to greet them, and Alycia had the great idea to bring them flowers. 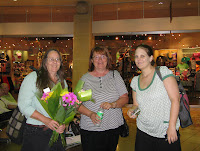 The mom was temporarily in a wheel chair but hopefully medical assistance here will help her leg heal and she will be able to walk without much difficulty. The family came with two bags and three backpacks. I was filled with awe and sadness that all of one's life could be in such small containers.

After a tour of their home by the case manager, Win, we served the family a meal and then left them to rest up. They got to rest all Saturday and I think they were resting when I arrived Sunday at 1:00 p.m. But they perked up and we were having a nice visit. I took a picture of all of them so we have the 14-year old Than Paw in the picture now. She's on the right in the complete family photo. 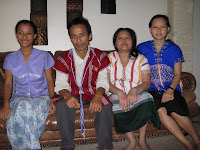 The family came from Mae La camp, as have all the families we have helped. They were able to bring some family photos and showed them to me. It's nice they have such memories and that they had family in the camp too. I wasn't able to find out yet if the other members were still in the camp.

The family does speak a little English and knows the alphabet and how to say some words. They may even know a little more than they let on! They asked me how to use the microwave and what the red stuff in the bottle in the refrigerator was (vegetable juice). From that I found out they wanted some chilies so since we couldn't find any I took Maung Say and May Paw to Fry's. Getting them to understand I needed them to come with me took about 5 minutes of repeating myself, using hand gestures and pointing to my shoes and their feet but eventually we got it together and now those two are well aware how to put seat belts on too! The father felt bad telling me he had no money but I told him I knew, he would have some soon and I would buy the peppers this time. Thinking back, it was still easier than the time I was trying to find fish paste a few years ago!

I had a great visit with them and look forward to my next visit. They are delightful. They hope they can come to our church sometime so that is something that will hopefully be done this summer.

Jill
Posted by Michelle Halonen at 8:18 PM No comments:

Mying Mying and her family, which we helped to resettle when they arrived from the refugee camp last year, has now moved to Texas to be with other relatives there. Jill says, "I will miss them. I really liked the mother, Mying Mying, as she was close to my age and just seemed a super lady. Hopefully she won't have to work overnight at a job there."
We are so thrilled for them that they will be close to other family members. Richest blessings!
Posted by Michelle Halonen at 2:22 PM No comments:

I thought since we were embarking on a new adventure that I could briefly update a somewhat open entry from last fall, just in case anyone was reading. In fall 2010, I was going to help a former Burmese refugee whose wife was a refugee in Malaysia get her to come to the U.S.A. I had little idea of where to start and at first I didn't have any luck.
Then I emailed the International Office of Migration which was actually able to give me a date of when she was coming! He had had many false hopes but we felt very confident when the IOM gave us a date. Unfortunately, Lutheran Social Services wasn't the sponsor for her so I wasn't able to be her volunteer helper.
She came just after Thanksgiving. Her husband rented an apartment and the two of them have been starting a new life together after being separated for many years. I finally met her in late January and she speaks some English and is a lovely woman.
We also had a family move away from Grace but before they did they were kind enough to inquire if the refugees we help needed any furniture. They donated a high chair to the family with a baby, and the family put it right to use. So the spirit of Grace has continued to help these people even after they have been in Arizona awhile. We look forward to the next family we are able to meet.
Posted by Michelle Halonen at 5:44 AM No comments: 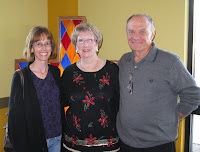 Judy, Ron and I delivered Christmas gifts to the Mying Mying family today Lutheran Social Services likes to give each family gifts the first year they are here.

Only Mying Mying and some friends were there. The kids were at a religious service.

Not only did we bring them gifts but we also received some as Mying Mying had purchased a cake and some soda for us. She has always been very giving which seems a good lesson for me that if you want to share, you can find a way. 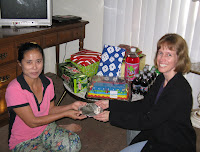 We inquired about her job and it is going well. She will get a shortened week for Christmas and New Year's. Since she works those long overnight hours, it's nice she will get a break from them but I don't know if she doesn't get paid. 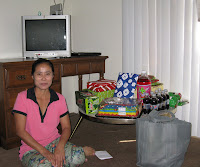 We also saw that the kids were doing well in school and had received honor certificates which were hanging proudly in the livingroom.

I recently learned how to say "thank you very much" in Karen and was able to say that and the friend commented on how I was learning some Karen. They really seem to appreciate when you take the effort.

So for the whole experience I say (phonetically) "da blute pa dough".
Posted by Michelle Halonen at 10:43 AM No comments:

Update from Jill:
Mying Mying was happy to tell me that she starts work on November 22 at the Royal Paper Company. This is the same location where Ah Mee worked before they moved to Minnesota. It is the same hours too, unfortunately--10 hour days overnight, putting tissue in boxes and paper towels on rolls. It is a start, though.

She seemed to indicate her English classes were over, although she can still go because they're during the day, but at first she will probably be tired. So I won't be going over there every week now as she liked me to review her lessons with her. I would be happy to still go, but think she thinks I'm only supposed to help her with that or other small things. I will miss seeing Mying Mying every week but will figure out something to keep in touch.

Ron, Judy and I will be delivering Christmas presents in December. Lutheran Social Services looks for sponsors to give each new family Christmas gifts the first year they are in America. It's fun to bring them surprises.
Posted by Michelle Halonen at 5:05 PM No comments:

Mying Mying is feeling confident to go to the bank to make a deposit herself. She told me what she would say in English--"I want to deposit"--and I understood her perfectly and then we practiced it a few more times. I am proud of her.

Most of the refugees are aware of the upcoming November 7, election in Myanmar. It is the first in 20 years. In preparation the leaders changed the country's name to the Republic of the Union of Myanmar (from the Union of Myanmar) and created a new flag.
Posted by Michelle Halonen at 2:00 PM No comments: